Bitter melon is generally consumed cooked in the green or early yellowing stage. The young shoots and leaves of the bitter melon may also be eaten as greens. The fruit is very bitter raw and can be soaked in cold water and drained to remove some of those strong flavours.

In Chinese cuisine, bitter melon (苦瓜, pinyin: kǔguā; Pe̍h-ōe-jī: khó͘-koe) is valued for its bitter flavour, typically in stir-fries (often with pork and douchi), soups, dim sum, and herbal teas (gohyah tea). It has also been used in place of hops as the bittering ingredient in some beers in China and Okinawa.[5]

Bitter gourd is commonly eaten throughout India. In North Indian cuisine, it is often served with yogurt on the side to offset the bitterness, used in curry such as sabzi or stuffed with spices and then cooked in oil.

In South Indian cuisine, it is used in numerous dishes such as thoran / thuvaran (mixed with grated coconut), pavaikka mezhukkupuratti (stir-fried with spices), theeyal (cooked with roasted coconut) and pachadi (which is considered a medicinal food for diabetics), making it vital in Malayali's diet. Other popular recipes include preparations with curry, deep-frying with peanuts or other ground nuts, and Kakara kaya pulusu in Telugu, a soup with fried onions and other spices. In Karnataka bitter melon is known as hāgalakāyi (ಹಾಗಲಕಾಯಿ) in Kannada; in Tamil Nadu it is known as paagarkaai or pavakai (பாகற்காய்) in Tamil.[6] In these regions, a special preparation called pagarkai pitla, a kind of sour koottu, is common. Also commonly seen is kattu pagarkkai, a curry in which bitter melons are stuffed with onions, cooked lentil and grated coconut mix, then tied with thread and fried in oil. In the Konkan region of Maharashtra, salt is added to finely chopped bitter gourd, known as karle (कारले) in Marathi, and then it is squeezed, removing its bitter juice to some extent. After frying this with different spices, the less bitter and crispy preparation is served with grated coconut. Bitter melon is known as karate (Konkani: कारांतें) in Goa; it is valued for its health benefits and used widely in Goan cuisine. In Bengal bitter melon is often simply eaten boiled and mashed with salt, mustard oil, sliced thinly and deep fried, added to lentils to make "tetor" dal (bitter lentils), and is a key ingredient of the Shukto, a Bengali vegetable medley that is a mixture of several vegetables like raw banana, drumstick stems, bori and sweet potato.

In northern India and Nepal, bitter melon, known as tite karela (तीते करेला) in Nepali, is prepared as a fresh pickle. For this, the vegetable is cut into cubes or slices, and sautéed with oil and a sprinkle of water. When it is softened and reduced, it is crushed in a mortar with a few cloves of garlic, salt and a red or green pepper. It is also eaten sautéed to golden-brown, stuffed, or as a curry on its own or with potatoes.

In Burmese cuisine, bitter melon is sauteéd with garlic, tomatoes, spices and dried shrimp and is served as an accompaniment to other dishes. Such a dish is available at street stalls and deli counters throughout the country.

In Sri Lanka, it is known as Sinhala: කරවිල karavila and is an ingredient in many different curry dishes (e.g., karawila curry and karawila sambol) which are served mainly with rice in a main meal. Sometimes large grated coconut pieces are added, which is more common in rural areas. Karawila juice is also sometimes served there.

In Pakistan, where it is known as karela (کریلا) in Urdu-speaking areas, and Bangladesh, where it is known as korola (করলা|করলা) in Bengali, bitter melon is often cooked with onions, red chili powder, turmeric powder, salt, coriander powder, and a pinch of cumin seeds. Another dish in Pakistan calls for whole, unpeeled bitter melon to be boiled and then stuffed with cooked minced beef, served with either hot tandoori bread, naan, chappati, or with khichri (a mixture of lentils and rice).

A soft drink made from bitter melon

Bitter melon, known as gōyā (ゴーヤー) in Okinawan, and nigauri (苦瓜) in Japanese (although the Okinawan word gōyā is also used), is a significant ingredient in Okinawan cuisine, and is increasingly used in Japanese cuisine beyond that island.

In Indonesian cuisine, bitter melon, known as pare in Javanese and Indonesian (also paria), is prepared in various dishes, such as gado-gado, and also stir-fried, cooked in coconut milk, or steamed. In Christian areas in Eastern Indonesia it is cooked with pork and chile, the sweetness of the pork balancing against the bitterness of the vegetable.

In Vietnamese cuisine, raw bitter melon slices known as mướp đắng or khổ qua in Vietnamese, eaten with dried meat floss and bitter melon soup with shrimp, are common dishes. Bitter melons stuffed with ground pork are commonly served as a summer soup in the south. It is also used as the main ingredient of stewed bitter melon. This dish is usually cooked for the Tết holiday, where its "bitter" name is taken as a reminder of the bitter living conditions experienced in the past.

In Thai cuisine, the Chinese variety of green bitter melon, mara (มะระ) in Thai, is prepared stuffed with minced pork and garlic, in a clear broth. It is also served sliced, stir-fried with garlic and fish sauce until just tender. Varieties found in Thailand range from large fruit to small fruit. The smallest fruit variety (mara khii nok) is generally not cultivated, but is occasionally found in the wild and is considered the most nutritious variety.

In the cuisine of the Philippines, bitter melon, known as ampalaya in Tagalog and parya in Ilokano, may be stir-fried with ground beef and oyster sauce, or with eggs and diced tomato. The dish pinakbet, popular in the Ilocos region of Luzon, consists mainly of bitter melons, eggplant, okra, string beans, tomatoes, lima beans, and other various regional vegetables all stewed together with a little bagoong-based stock.

In Trinidad and Tobago, bitter melons, known as caraille or carilley, are usually sautéed with onion, garlic and scotch bonnet pepper until almost crisp.

In Mauritius, bitter melons are known as margose or margoze. 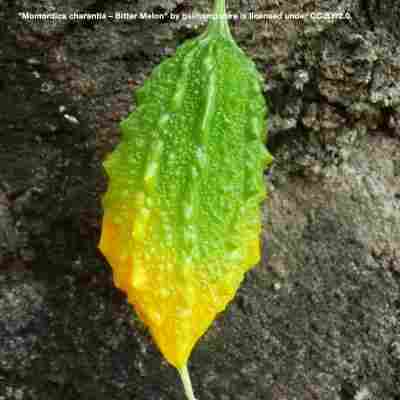 This is a very popular vegetable growing on a vine which goes about 5m tall. A high yielding variety producing 35cm long slender dark green fruit up to 400-450 grams.. It’s cultivated around the world for its edible fruit, which is considered a staple in many types of Asian and Indian cuisine.

Best time to sow seeds after frost, seeds need min 20oC to germinate. For better germination rate, soak the seeds in water for a few hours before planting and sow them in 20mm deep in a sunny, well-drained position. They germinate between 10-14 days. Sow them 90 apart. Enjoy your harvest approx. 65-70 days from transplanting.