Many cultures in India, Afghanistan, Iran, and the Middle East use fennel fruits in cooking. It is one of the most important spices in Kashmiri cuisine and Gujarati cooking.[30] It is an essential ingredient of the Assamese/Bengali/Oriya spice mixture panch phoron[31] and in Chinese five-spice powders. In many parts of India, roasted fennel fruits are consumed as mukhwas, an after-meal digestive and breath freshener (saunf), or candied as comfit.

Fennel leaves are used in some parts of India as leafy green vegetables either by themselves or mixed with other vegetables, cooked to be served and consumed as part of a meal. In Syria and Lebanon, the young leaves are used to make a special kind of egg omelette (along with onions and flour) called ijjeh.

Many egg, fish, and other dishes employ fresh or dried fennel leaves. Florence fennel is a key ingredient in some Italian salads, often tossed with chicory and avocado, or it can be braised and served as a warm side dish. It may be blanched or marinated, or cooked in risotto.

Fennel fruits are the primary flavor component in Italian sausage. In Spain, the stems of the fennel plant are used in the preparation of pickled eggplants, berenjenas de Almagro. An herbal tea or tisane can be made from fennel.[32]

On account of its aromatic properties, fennel fruit forms one of the ingredients of the well-known compound liquorice powder. In the Indian subcontinent, fennel fruits are also eaten raw, sometimes with a sweetener. 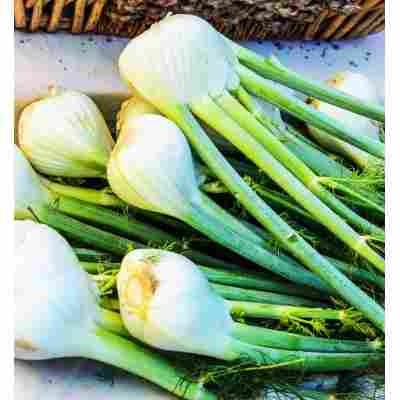 A medium  to early variety. The hearts are round, medium-sized and compact. the sheaths are thick, fleshy and entirely  white with very little fibre. They are crunchy and tender white  with  a  sweet, aromatic flavour. SOWING: can be sown  in several stages from july until the beginning September for harvesting from November until February.

Fennel is easy to grow. They prefer full sun and a well drained soil. They will do best in rich soils.Water them during dry periods, once or twice per week. Add a general purpose fertilizer once or twice a season. While classified as a herb, Fennel is a popular European vegetable too. Native to Mediterranean region, the bulbous base and stalk is popular eaten raw like celery, cooked, or boiled. Closely related to Parsley, Fennel is popular in Italian and other Mediterranean recipes. Also called Florence Fennel or Finuccio, it is easy to grow and very hardy, lasting well after the first frost. With bright green, fern-like leaves and aromatic yellow flowers, this plant will grow three to four feet tall. Plant it in the back of the herb garden or in your vegetable garden. Foliage and seeds have an anise-like flavor.

Perhaps the most indulgent vegetable to start off at this time of year is Florence fennel, otherwise known as finocchio or, more commonly, bulb fennel. The handsome feathery foliage of this crop is matched only by its exquisite aniseed flavour that makes a fine pairing with fish (try baking parcels of mackerel with slices of fennel and lemon for a sublime dinner). But fennel has more strings to its bow than this – pop chunks into a stew to freshen things up, or finely slice a bulb over a garden-gathered salad using a chef’s mandolin. The leaves can be used in place of herb fennel.

Bulb fennel is perhaps a slightly misleading name, as the ‘bulb’ is in fact the swollen stem base of the plant. But this is nitpicking as all you really need to know is that this is a vegetable to luxuriate in – a gourmet kitchen gardener’s treat!